Carolyn and Dick Barry’s collection will form the foundation of a museum bearing their
name at ODU. Photo by Mark Rhodes[/caption]The living room in the Suffolk home of Richard “Dick” and Carolyn Barry resembles a staging area.

Stacks of tightly taped packing boxes take up space where furniture once stood. It was removed a few months ago, along with the rugs, to make room for the boxes and their fragile contents.

The Barrys are donating an expansive art collection, including paintings and glass artworks, to a museum bearing their name now under construction at Old Dominion University.

“It’s a big project, and they are packing piece by piece,” says Dick, 75, who retired in 2010 as vice chairman of Landmark Media Enterprises (formerly Landmark Communications). “We’re not racing to get the packing done. We’d rather get it done carefully. We are living with the process.”

The couple offered in 2016 to donate their collection to the university “as a foundation stone to start a new museum at ODU and to fund construction and operations,” he says. 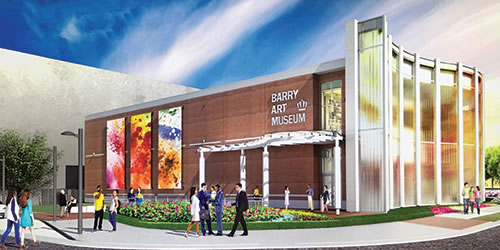 The Barry Art Museum is being built with art and financial donations from the couple that are valued over time at more than $35 million. The Barrys’ gift is the largest in ODU’s history.

Many of the donated works focus on the Studio Glass movement, begun in 1962 when ceramist Harvey K. Littleton partnered with the Toledo Museum of Art to hold glassblowing workshops.

The Barry collection also includes 70 paintings, prints and drawings and 90 antique dolls. The paintings include works by well-known American modernists, including Jules Olitski, Charles Sibley, Milton Avery, Marsden Hartley and Rockwell Kent, as well as marine art — sea-inspired 19th-century works by artists such as James Buttersworth, Montague Dawson and Robert Salmon.Carolyn’s collection of rare and antique dolls date from the 19th century. A gallery at the museum will be devoted to the dolls.

The new museum will be more than “a phenomenal glass-art collection. It will chronicle the rise of American glass artists at the forefront of the international scene,” ODU President John Broderick says. “The Barrys’ gift will elevate our efforts in the arts and inspire a new generation of artists and creative minds in our community.”

The new museum also is expected to add to Norfolk’s prominence as a mecca for glass art collections. Last year The Glass Art Society selected the Chrysler Museum of Art and its Perry Glass Studio as the host for its 46th annual conference, a coup for the city.

They became interested in collecting art when Carolyn, now 74, joined the docent program at Norfolk’s Chrysler Museum of Art in the early 1980s. “The more I learned about the history of art, and especially glass art, the more passionate we both became about collecting,” she says. “Our knowledge of art keeps growing as we collect.”

The Barrys began visiting the Pilchuck Glass School in Washington state and the studios of many of the movement’s pioneers.

“These works for many years were the strength of our glass collection,” she says. “Now we are collecting pieces by the younger artists working today as well. We are happy that we have a good representation of the early artists of the 1962 movement.”

The couple considered donating their art collection to the Chrysler, but the museum already had large holdings of glass art and American paintings, Dick says. “Building a new museum at ODU was a more attractive prospect for us. We remain very close to the Chrysler and continue to support the glass program there.”

The art they buy must “speak to us and relate to the collection,” says Carolyn. “We have relationships with galleries around the country. A crucial aspect is our friendship with artists we have met over the years. We enjoy knowing prominent artists in this field and learning from them.”

Museum to be a gateway

Much of that collection is now headed for a new home. Soon the boxes in their house will be transported to the museum, which is scheduled to open in November. The 24,000-square-foot, two-story museum was designed by Burrell Saunders of Saunders + Crouse Architects in Virginia Beach.

Positioned as a gateway to ODU’s main campus, the museum is adjacent to the Ted Constant Convocation Center and near the new Darden College of Education building. The museum will include galleries for the permanent collection as well as a space for faculty artworks and traveling exhibitions.

The Barrys have participated in the design process every step of the way. “Burrell’s design employs a solid glass façade, lit from within,” Dick says. “The interior is very contemporary. It should be a stunning building.”

The Barrys created the Old Dominion University Museum Foundation, which will operate the museum in partnership with ODU. “The university has been a superb partner and has provided excellent support to the project,” Dick says. “We have a seven-member independent board that governs the institution.”

The Barrys’ collection “is what we refer to as the founder’s collection. It sets the tone for future collecting,” says Jutta-Annette Page, the museum’s executive director. who was senior curator of glass and decorative arts at Toledo Museum of Art and previously the curator of European glass at Corning Museum of Glass.

Page consults the Barrys as she considers art purchases for the museum. “Unlike buying art for our personal collection, we are establishing a more formal process for the museum, with the director taking the lead role,” Carolyn says. “We have recently acquired more than a dozen glass sculptures and paintings for the museum that are new to the collection. They are waiting in storage now for the opening in the fall.”

The Barrys have a long relationship with ODU. Dick’s father, Richard Barry Jr., was a math professor at the university for 25 years after a 25-year career as a naval officer.

Dick was a member of the board of visitors for eight years, with two years as rector. He now co-chairs a capital initiative for the university and co-chaired a capital campaign 20 years ago. Carolyn taught math as an adjunct faculty member at ODU in the 1960s.

In addition to their involvement with ODU, the Barrys have served on the boards and fundraising committees of many nonprofit organizations in Hampton Roads. “We both believe it is essential to be a part of the community and make contributions to community welfare,” Dick says.

The Barry’s have a long history of “promoting philanthropy and civic engagement,” says ODU’s Broderick. “They have made many artistic and cultural contributions to Old Dominion University and other Hampton Roads institutions over the years, and they have provided scholarships that helped hundreds of students complete their education.” 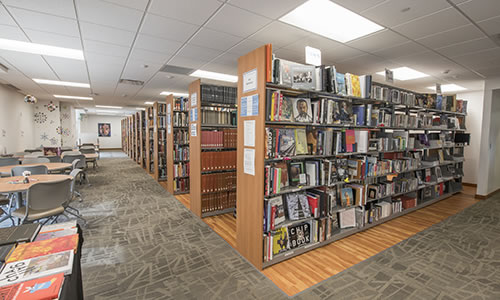 In 2015, the couple committed $2 million to help create the Barry Arts Building. “This building includes two of the finest art history libraries in the country — the Elise N. Hofheimer Art Library and the Jean Outland Chrysler Library of the Chrysler Museum of Art,” Broderick says.

The Barrys say they are grateful for Broderick’s support through the museum project. “President Broderick was the driving force at the university and made this project possible,” Dick says.

A key objective for the museum is for it to be relevant to the ODU community, including its students, faculty and staff, says Page. “We recognize that many of these constituents have never or rarely set foot into an art museum. Having an art museum on campus creates opportunities for exposure to original art, its creative processes and diverse cultural contexts that can instill in our students an appreciation for art that will resonate throughout their lives.”

Art definitely has changed the Barrys’ lives. During his 40-year career at Landmark, Dick served in various positions, but the idea of being the benefactor of an art museum was “unimaginable,” he says. “I started out as a lawyer at the bottom of the totem pole and ended up here.”